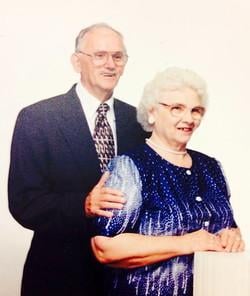 Lillian Theo (McCaughey) Johnson, age 93, passed away Saturday, October 4, 2014. The daughter of Clyde & Suvilla (Bruckart) McCaughey, she was born on May 20, 1921 in Hillsdale. During World War II she worked at the Ford Motor Company’s Willow Run Bomber Plant in Ypsilanti to help the war effort. In the mid-1960’s she had worked for Meijer and for several years cared for John & Gloria Bundy’s children, Jeri and Marty, and also for Tom & Barb Hiller’s children, Matthew and Christopher. On September 21, 1946, in Indiana, she married Franklin Johnson, a native of Saginaw, and together they raised four daughters and enjoyed almost 59 years of marriage until he passed away on June 30, 2005 at the age of 81. She was also preceded in death by her parents; and two sisters, Betty (EJ) Snay of Mesick, and Juanita (Raymond) Easton of Jackson. Surviving are her four daughters, four daughters, Diana Johns of Byron Center, Nora (Ken) Oyler of Utah, Priscella Cappon of Arizona, and Bonnie Bird of Wyoming; eleven grandchildren; nineteen great grandchildren; and four great-great grandchildren. Also surviving are several nieces, one nephew, and many great nieces and great nephews. Memorial services are at 1:00 pm, on Wednesday, November 5, 2014 at Michigan Cremation & Funeral Care, 3627 Linden Avenue S.E. at 36th Street (one block West of Eastern Ave.) with a life celebration luncheon immediately following.