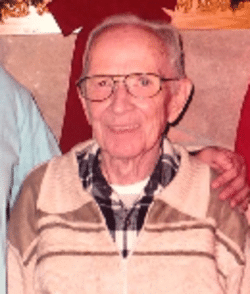 The Great Depression was soon upon the Austin family, and the parents reported that one year Les and his brother Norman received a joint Christmas gift of a pair of ice skates and took turns skating all day.

In the 5th grade Les received the surprise transition of having to learn left-handed penmanship when his right hand became inoperable from a severe cut to his tendon. A genetic disorder affected his eyesight and later he would be declared legally blind.

Les’s son, Dan was born on New Year’s Day, 1952. The family lived in Holland, where Les, refusing to go on disability, was employed by Chris Craft and Bohn Aluminum. In 1957 they relocated to Grand Haven where he was employed by Bastian Blessing until his retirement.

In 1968 Les married Dora Groeneveld, who in 2000 preceded him in death. They were members of Seventh-Day Adventist Church where he regularly walked to the supermarket to shop for other residents unable to get out, while keeping the snow and ice cleaned off the cars for those who could. In 1994 he received Pinewood’s “Resident of the Year” framed award.

Other hobbies included gardening and his love for children. He loved to laugh and tell jokes and was friendly with everyone. Three times a week he would have breakfast at Jeanne’s Cafe.

Les’s family extends heartfelt gratitude for his compassionate care by the staffs of Hospice and Sanctuary at the Shore, where he expired. Les’s cremains have joined Dora’s at the Pine Wood Cemetery. A memorial service will be held at a later date in Grand Haven, at Seventh-day Adventist Church.