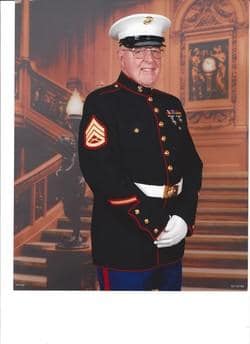 He was a Marine – “Semper Fi” (always faithful) were more than mere words to him. Though rough around the edges, he had a good heart.

The hats he wore were many including husband, father, grandfather, brother, friend, and servant. He was a lector and lay distributor in our churches, Our Lady of the Lake and Saints Peter & Paul. He was a past Grand Knight of the Knights of Columbus. He had a beautiful singing voice which served him well when he was an auctioneer at charity events. Larry often worked behind the scenes to help others in need; he had a keen eye for spotting someone’s need and was quick to act upon it.

He grew up in the Lyons/Muir area where he graduated from Lyons High School. He enlisted for the Marines (the uniforms caught his attention) and a few days later was off to boot camp. He soon learned that he was not the baddest dog in town. He served his country in Vietnam and was shipped home with a shrapnel wound. He went on to graduate from MSU with a degree in criminal justice and was employed through the State of Michigan Department of Corrections until he retired as Deputy Warden.

Next to God and family, Larry’s greatest joys were being outdoors, hunting, and motorcycles. He was a long time member of the GWRRA and won several awards and trophies for the various motorcycles he showed with his wife Janet.

In June, 2015, Larry followed the brightest of lights to be with Jesus and experience the greatest feeling of joy he could ever know. When his family will one day join him, they’ll know him by the beautiful sound of his voice echoing near His throne. God’s will be done. He is greatly and deeply and profoundly loved. Semper Fi. He was a Marine.

A funeral mass will be offered for Larry Roberts at 11:00 AM on Saturday, June 27, at Saints Peter & Paul church in Ionia, Michigan. Visitation will precede the funeral at 10:00 and a luncheon will follow the service. A motorcycle procession will take Larry from his birthplace in Lyons to his home in Holland beginning at approximately 1:30.