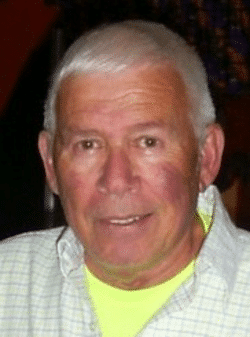 Starting at age nine, Kenneth played Fast Pitch Softball in the Miller Road Lansing area until age 35, when he moved north to Mecosta County. He enjoyed bowling in Lansing and Big Rapids for many years. He was a member of Fraternal Order of the Moose in Lansing and the Chippewa Lake Lions Club which he served as President for several years. Ken also served in the National Guard from 1956 to 1960.

Kenneth worked at Fisher Body, Oldsmobile in Lansing, and Diamond Reo as a truck painter for ten years. Before Diamond Reo closed their Lansing factory, Ken and wife Janet Scarbrough Larie Spedowski and children relocated to their cottage at Pogy Lake (1973). Ken began his 21-year career at Ferris State College/FSU as a custodian, moved to the grounds department, then Skilled Trades as a Journeyman Painter; retiring in 1994 as a Journeyman Plumber.

Ken painted vehicles on weekends and was in partnership for several years with his cousin Robert “Bud” Hewson (1942-2009) at Jehnsen Lake.

After retirement from FSU, Ken and Barb owned and worked at Columbine Stained Glass Studio in Chippewa Lake and Hersey (since 1998). Ken found a love for cutting and designing stained glass, giving them an opportunity to make lasting memories with rainbows of glass for six churches and many homes in the area as well as windows in Tennessee, Texas, Colorado, Georgia, Alabama, and Idaho.

A memorial service will be held at the Hersey United Methodist Church on Friday, July 4th at 2:00 PM with a potluck to follow at his home on the Muskegon River.

In lieu of flowers, please make donations in Ken’s name to the Susan P. Wheatlake Cancer Center in Reed City or Hospice of Michigan or to the Hersey United Methodist Church–Building Fund. Cards and letters can be sent to the family at General Delivery, Hersey MI 49639 or Barbara Larie co Hersey UMC, PO Box 85, Hersey, MI 49639.