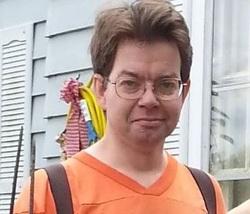 The son of David & Mary (Lundberg) Aune, he was born on  April 1, 1969 in Oak Park IL, and lived in Chicago for many years. He is a graduate of Morgan Park High school in Chicago, Loyola University Chicago and Ivy Tech in South Bend Indiana. As a teen he lived and attended school in Trondheim, Norway  where his father was on sabbatical.

His interests in all things scientific and mechanical lead him to work in a variety of industries. He was a fan of Oldsmobile cars, and fascinated by wind turbines. He was a member of Mensa. He married Jill Ellen Hansen in Holton, on September 26, 2015.

Surviving are his wife; parents; two brothers, Kris (Heidi)  Aune of Chicago, IL and Kurt Aune of Chicago, IL.; one sister, Karen (Ben Johnson) Aune of Madison, WI; three nephews; one niece; along with many cousins, aunts and uncles.

Memorial services will be held at 2:00 p.m. on Saturday, October 15th, at Holton Evangelical Lutheran Church, 6655 Marvin Rd, Holton, with pastor Erich Hoeft presiding. A visitation will be held one hour prior to the service. In lieu of flowers donations can be made to a memorial fund in the name of Karl Aune to the Fremont Area District Library, 104 E Main Fremont MI 49412.