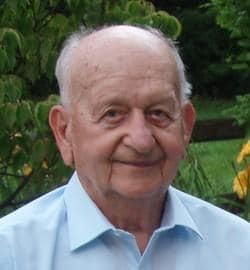 Joe was born on September 30, 1919, in Johnstown, PA, the youngest son of John & Mary (Leso) Vyhonsky, in their family of ten children. His father was tragically killed in a work accident at the steel mill when Joe was only 2 years old. Growing up with such a large family, he always had chores at home but in high school he played intramural basketball, sold candy at lunch time and was on the back stage crew for school plays.  After high school, he worked as street car driver in Johnstown then moved to New York City to work for his brother washing windows on skyscrapers in Times Square!  It was there that he also got his training for being the “Baby Whisperer” by helping out with the care of his baby nephew Richard.

Joseph was a proud U.S. Army veteran, serving in WWII as an airplane mechanic. One of his most memorable experiences was the privilege of participating in the Honor Flight, traveling to Washington DC to see the WWII Memorial, Arlington Cemetery and many other sights. It was a day he never forgot!

He met the love of his life, Virg, bowling in the church league. During their courtship, they had fun going to see the Big Bands in Altoona so they could dance the jitterbug and polka.  They married at St. Theresa’s Church in Johnstown on April 29, 1950 and then relocated to Hagerstown, MD for Joe’s new job opportunity in an airplane factory.

Soon after, they began their family with the arrival of Rita Jo in 1951, and then moved to Cleveland in 1952. The family grew with the addition of Nancy in 1957. Joe worked hard at Republic Steel as a tool and die maker and took a second job with security at American Greetings so Virg could be a stay-at-home Mom. He was still involved in all their activities and provided loving care and guidance with doses of fun, travel and adventure. If there were any behavior problems to be handled, Virg would just say, “Wait till your Father gets home!” and then all Joe would have to do is give his daughters “the look,” or say, “What did your Mother say??!!” and the problem would be solved!

Joe was very active in the St. Thomas More Church since 1966. He was a member of the Knights of Columbus and Holy Name Society, (where he was honored as Man of the Year) but also became involved in selling raffle tickets, giving communion to the homebound and even the Mop-n-Glo club, which cleaned the church every Wednesday. He was always willing to help out wherever he was needed.

Joe valued his relationships with God and his family, especially his grandsons, and took an active role in helping to raise them. He and Mom were often seen cheering at the grandsons’ sporting events.  Just recently, he became the great grandfather of Leo and was so proud!  He received the title of “Baby Whisperer” because he was able to calm Leo when he held and talked with him.

Hobbies and interests included bowling, golf, watching “Wheel of Fortune” and “Jeopardy,” playing euchre (and the famous grin when he laid down “a loner”), and cheering for all Cleveland sports teams.  No doubt he was watching the Cavs finally win the championship, maybe even helping them make some of those unbelievable shots!

Joe touched the lives and hearts of many with his quiet manner, generosity and positive attitude.  His caring and kindness was even quickly recognized by the people at Aurora Pond Independent Living Community in Grand Rapids, Michigan where he lived for the last nine months. He will surely be missed, but all who knew him will remember his loving spirit.

Mass will take place at St. Thomas More Church, 4170 N. Amber Dr., Brooklyn, on Monday, June 27th at 10:00 am, a Luncheon will follow in Utopia Church Hall. Inurnment with Military Honors will be at Ohio Western Reserve National Cemetery, 10175 Rawiga Rd, Rittman, on Monday, June 27th, at 2:30 pm., where Joseph will be laid to rest with his wife.