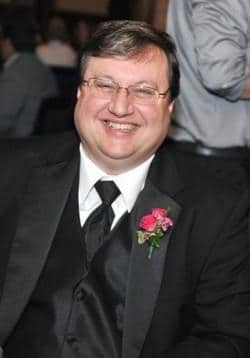 John S. Bambini, age 54, of Kentwood, passed away at home, Saturday, March 19, 2016, of pancreatic cancer.  He was surrounded by his loving family.

The son of Louis & Maria (Heczko) Bambini, he was born on March 30, 1961 in Chicago, IL. John studied electrical engineering at the University of Evansville.  He met his wife during their college years.  John and Deborah moved to Grand Rapids in 1986 where they raised their family.  John began and ended his career, locally, at Lear Siegler.  As a department of GE Aviation, writing software for this company, John’s mission was to “keep our skies safe”.  He also worked for a brief time at Prince Corporation and Johnson Controls in Holland. John maintained close and lasting relationships with many of his work colleagues, which speaks strongly to his character and commitment.

John enjoyed tinkering with all things electronic and spending time with his family.  For entertainment, he enjoyed sci-fi movies and television shows. He is remembered for his kindness, compassion, dry humor and quick wit.

He was preceded in death by his parents. John is survived by his wife of 32 years, Deborah (Lindemann) Bambini; two children Michael (Emily) Bambini and Meghan (Dave) Henders; two grandchildren, Joseph Bambini and Asher Henders; brother, Louis (Jeanne) Bambini; many nieces & nephews; and his faithful canine companion, Jake. John was very proud of the adults his children have become and the families they have started.

Visitation is from 4-6 p.m. on Wednesday, March 23, 2016 at Trinity Lutheran Church, 2700 Fulton St E, Grand Rapids, where memorial services will be held at 6:00 p.m. on Wednesday. In lieu of flowers, memorial donations to Hospice of Holland are encouraged.