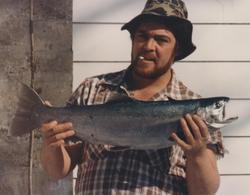 The son of the late John & Bette (Greenwald) Mangold, he was born on September 15, 1952 in Grand Rapids.

John grew up in Comstock Park.  From a young age, John was always a hard worker, mowing lawns and doing odd jobs around the neighborhood.  He graduated from Comstock Park High School and continued working, dedicating 20 years of service to Steelcase.

In his free time John enjoyed fishing with his buddies, always trying for that “Big Catch”.  He was an avid hunter, fisherman and all around outdoorsman.  John will be remembered for his sense of humor, always telling jokes and laughing. He also had a huge heart, helping those in need as often as he could.

He was preceded in death by his parents, his sister Amber, and his brother Craig. John is survived by his son Michael Cronin, his brother Mark Mangold, sister Robin Mangold, his nephews and niece.

Honoring his wishes, cremation has taken place. To send a message of sympathy to the family, sign John’s online guest book, or to share a favorite memory, please visit: www.MichiganCremation.com