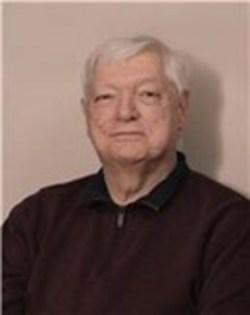 A native of Hingham, John was stationed in Bremerhaven, Germany and Trabzon, Turkey with the United States Air Force before completing his Bachelor’s degree at the University of Wisconsin, Oshkosh. He then worked for nearly thirty years as a linguist, cryptologist, and analyst for the National Security Agency at Fort Meade, Md., spending seven of those years in Garmisch and West Berlin, Germany.

Upon retiring in 1997, he moved to Holland with his family. He later worked at Vogelzang Hardware and at Hope College Van Wylen Library.

John loved travel by car, train, or boat and cooking the foods that he came to appreciate during his extensive travels. Projects bearing the mark of his gift for working with his hands include a sprawling model railroad. He was a longtime member of Third Reformed Church, where he served as a deacon; a fixture in the stands at Hope College basketball games, and a long-suffering fan of the Green Bay Packers and Chicago Cubs.

Visitation will be held at Third Reformed Church at 10:00 a.m. on Saturday, Feb. 2, followed by a memorial service at 11:30. In lieu of flowers, donations may be made to Hospice of Holland or the American Cancer Society

To send a message of sympathy to the family, sign John’s online guestbook or to share a favorite memory, please visit: www.MichiganCremation.com