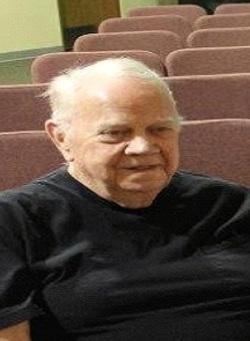 He was preceded in death by his parents; his beloved wife, of 65 years, Caroline (Burch) Gulley; and sisters, Hazel Deane (Pete) Ebert and Roberta (Fran) Quick.

What an adventure his life has been.  He served in the US Navy during the Korean War on the USS Rockbridge, married mom while she was in high school and he was about to leave for the base in Norfolk VA.  After his honorable discharge he worked a few years at Michigan Carton in Battle Creek, and then finished his career with Michigan Bell Telephone.  He and mom cared for over 100 foster children.  He was super proud of the fact that while attending their concert at Miller auditorium, the Lettermen invited him on stage to sing.  He’s happy to tell you that he sang and The Lettermen backed him up!  He so loved fishing, and could catch when no one else could.  He loved the trips to Beaver Lake Ontario with the family and especially loved fishing with his brother, Jimmy and his dad there.  Later he and son in law Bruce discovered Lake Gogebic in the U.P., and he loved fishing here as well.   He and mom had a traveling music ministry, doing revivals and concerts, and later the whole family joined.  People joked that you had to audition to marry into his family.

He was proud to serve on the board of Michigan Christian Campus Ministries, and supported their work to the end of his life.  He served as deacon, music leader, choir director, and elder at Central Christian Church in Battle Creek, and also as a music leader at the Comstock Church of Christ in Kalamazoo.  In his later years he returned to the church of his youth, Central Christian in Battle Creek.  In 1979, (after retiring), he received his degree from Cincinnati Bible College, and then went into full time preaching ministry at the Newtown Church in Battle Creek and the Deland Church of Christ in Florida (the snowbird years), and although he ‘retired’ from this job as well, he never quit preaching.  While a patient at The Oaks, he ministered to staff, resulting in the baptism of his favorite speech therapist, Mary.  You couldn’t talk to him for more than 5 minutes without him asking if you know Jesus, and if not he’d be glad to introduce you!

He has survived the Korean War, 4 teenagers, colon cancer, and a triple by-pass with life threatening complications.  We are forever grateful to the elders at the Plainwell Church, where he was a member at the time, for the prayers and anointing that we are sure convinced God that his ministry on earth was not yet complete.  That by-pass did, however, rob him of his singing voice.  He was so sad about that.  So although we grieve now, and will miss him always, we rejoice that he is with Jesus!  His beautiful tenor voice is complete again and he sings!  His favorite alto sings with him!  (Unless she’s on piano duty…)

Per John’s wishes cremation has taken place.  Visitation will take place on Sunday, January 20, 2019, at Central Christian Church, 713 Riverside in Battle Creek, from 3:30 pm until 4:30 pm, followed by a memorial service at 4:30 pm.

To send a message of sympathy to the family, sign John’s online guestbook or to share a favorite memory, please visit: www.MichiganCremation.com