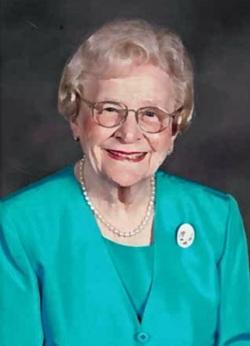 Jean E. (Stolz) Chamberlain, a dedicated and much loved resident of the Lansing area for 98 years and the widow of Claude D. Chamberlain; passed away on Sunday, Dec. 27th of natural causes. The youngest child of John and Maude (Wilcox) Stolz, she was born on November 21, 1917, in Lansing. In 1935 she graduated from Lansing Central High where she excelled on the debate team. Her education continued at MSU, graduating in 1939 with a degree in English and Speech. She taught and coached drama at the new Saginaw Arthur Hill High School for two years. In 1941 she married Claude D. Chamberlain. They raised their family in East Lansing, their home was filled with laughter and love. Friends were always welcome. Jean especially enjoyed hosting parties, bringing people together for lively conversation. She belonged to Plymouth Congregational Church for 70 years, serving in many roles. Theater was a passion; she attended almost every production of Lansing Civic Players, as well as other theater groups of the area. She was a life long supporter of Lansing Symphony Orchestra. The St. Lawrence Hospital Auxiliary benefited from her leadership as Pink Ball Chairman and Auxiliary President. During the 1970’s Jean was a participant in the Lansing Fine Arts Council and an early member of the Wharton Center Inner Circle. She truly enjoyed belonging to AAUW, serving as President as well as leading several study groups. In 1955 she was honored to chair the Greater Lansing Alumni Dinner celebrating MSC becoming a University. She was a member of the Lansing Woman’s Club for 60 years, presenting numerous papers and serving as Literary Secretary and President. She wove a rich tapestry of friendships within this group, participating through December of 2015. While introducing a program Jean once said, “We look back at the past, not to escape the present, but to find faith for the future.” Her family will remember her affection for books, newspapers and magazines. She was always reading. Sailing on Lake Michigan, family ski trips and cruising on the Michigan Princess were some of her favorite activities. She was a member of the Horton Bay Club on Lake Charlevoix where she enjoyed being close to nature and spent many vacations. She loved college sports, particularly MSU football! She was preceded in death by her husband of 57 years, Claude D. Chamberlain; and her son, John C. Chamberlain. Surviving are her daughter, Julie (Anthony) Foust of Grosse Pointe; son, James (Sandy) of Haslett; daughter-in-law Karla Chamberlain of Grand Ledge; grandchildren, Danielle (Dustin) Derethik, of St. Paul, MN, Blair Foust, of Flagstaff, AZ, Laura Chamberlain, of Beavercreek OH, Christopher Chamberlain of Grand Ledge, and Alan (Dana) Mackey of DePere, WI; and great-grandchildren Reese and Qynn Mackey of Wisconsin. She was the proud aunt to the Stolz, Chamberlain and Perry families. A memorial service will be held at 11:30am on Saturday, January 9, 2016 at Plymouth Congregational Church, 2001 E. Grand River, Lansing. Visitation time with family will be held at the church on Fridayevening, January 8th, from 6-8 p.m. and from 10:00am to 11:15am on Saturday morning. Memorial Gifts may be made to, Plymouth Congregational Church, Lansing Symphony Orchestra or Mother Theresa House.