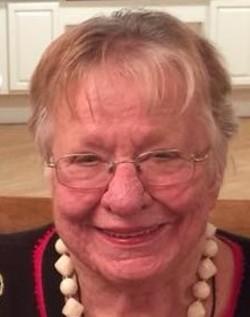 Share
Tweet
Share
Janet J. Price, 90, passed away Sunday, January 20, 2019, at Mother Teresa House of Lansing.
The daughter of Edgar & Bernita (Dolezal) Nott, she was a Christmas baby, born December 25, 1928, in Stockbridge. Jan graduated from Stockbridge High in 1946 and attended Jackson Community College that fall. In November she met Army Sgt. Richard Price of Eaton Rapids on a blind date. It was a whirlwind romance. Six weeks later, on December 30, just five days after her 18th birthday, they began a married life that lasted until his death 56 years later.
Janet was preceded in death by her spouse and best friend, Richard Price; her parents; and her sisters, Peggy (Nott) Kramer and Jo Anne (Nott) Lambert. She is survived by daughters, Linda & David Lowther of Ellenton, Florida, Lori & Bill Ingraham of Lowell, and Lissa & Bruce Barbour of Rives Junction and Leesburg, Florida; sisters, Linda & Bill Taylor of Orange City, Florida, Joanne & Chuck White of Williamston and Lakeland, FL, and Sandy & Ed Allred of Jackson; grandchildren, Kevin Poe of Arlington, TX; Kyle & Cindy Poe of Frisco, TX; Korey & Angela Poe of Howell, Kimberly Poe of Ann Arbor, Matthew & Ashley Barbour of Lexington, KY, Ben & Paula Barbour of Leslie, Drew Ingraham of Lowell, and Adam Ingraham & Colleen Cameron of Allendale; great-grandchildren, Ryan Poe, Mallory Poe, Haven Poe, Ronan Poe, Travis Poe, Heidi Poe, Emma Barbour, Ethan Barbour, and Mason Barbour.
Jan was an excellent cook and will be remembered by family for many dishes, but especially her delicious fruitcake, macaroni and cheese, meatballs and rice pudding. She was at home with her girls in their early years, sewing many of their clothes. Once they were in school she took a job at Katz Elementary School in Munith. From there she went on to work at D&C Stores in Stockbridge until retirement. In the 1960’s, while she and Dick both worked, they purchased her family’s ancestral farm, just west of town, designed, built and operated Willow Creek Golf Club. Once retired they split their time between Stockbridge and Leesburg, Florida. After Dick passed away in 2001; Jan spent most of her time in Florida, eventually taking up competitive ballroom dancing. Dancing took her to many US cities as well as to Puerto Rico and Monaco. In 2010, she returned to Michigan to be nearer her daughters and their families. Her daughters and their husbands, her grandchildren and their spouses and her “greats” gave her such joy!
The family will come from near and far to celebrate Jan’s life at a gathering this summer -her favorite time of year!
In lieu of flowers, the family suggests memorial donations to Mother Teresa House, PO Box 13004, Lansing, MI 48901. Their loving staff and volunteers, along with McLaren Hospice, took such great care of Jan in her final days.
To send a message of sympathy to the family, or to share a favorite memory, please visit Jan’s online guestbook at www.MichiganCremation.com