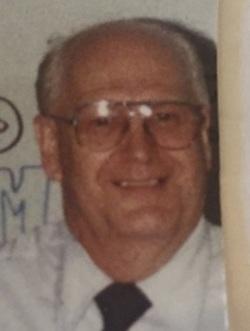 James S. Blair, of Three Rivers, passed away peacefully on Feb.14th 2017. Jim was a U.S. Navy Veteran who served in Japan. He enjoyed singing in the Navy choir while he was there. He then took his career to Citizens Bank. From there he started a 23 year career at ICB Bank of BH as VP of Operations.

Jim had a Big Heart & would always tell you to “keep smiling.” He was at his best while helping others.  He served for Blossom land United Way, Treasurer at YMCA,YMCA Board of Christian Education & on the Mission Board at Niles RD Community Church.

He was preceded in death by his sister, Virginia, and Delores Blair Seafert Blanchard; and his four brothers, Gene, Richard, Oscar, and Martin Blair. Jim will be dearly missed leaving behind lasting memories!

Special thanks to the VA in BC for their wonderful care & support of our Jim! God bless the VA & their many angels.