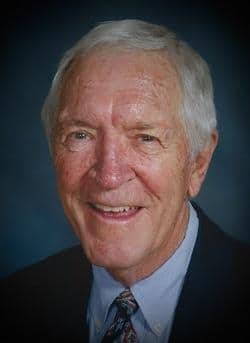 Jack Keller, a “great, great guy” and founder of Keller Ford, passed away Thursday, April 30, 2015 at Spectrum Health-Butterworth Hospital at the age 88. Jackie Dean Keller was born on August 8, 1926 in Delphos, Kansas to George W. & Lela (LePlant) Keller and was a veteran of World War II, proudly serving in the U.S. Navy aboard the USS Shangri La.

Following the war, he worked for a dairy company until coming to St. Clair Shores in the early 1960’s where he worked as an automobile salesman for Roy O’Brien Ford. In 1966 he moved to Grand Rapids and purchased his first automobile dealership at Jefferson and Cherry — Keller Ford — and remained an active part of the Grand Rapids business community as a Ford dealer since that time. He was well known in the community as the “great, great guy” as a result of advertising campaigns over the years, and he lived his life that way. Jack was a true people person and enjoyed many outdoor activities like sailing, golfing, skiing, horseback riding, traveling and even tae kwon do.

He was preceded in death by his parents; and a sister, Phyllis Duras.

The family will receive relatives and friends from 10-11 a.m. on Saturday, May 16, at St. Robert of Newminster Catholic Parish, 6477 Ada Drive S.E., Ada, where the Memorial Mass will be celebrated at 11:00 a.m. on Saturday, May 16. Military honors will conclude the ceremonies. Instead of flowers, Jack would have appreciated contributions in his memory to either the American Cancer Society or C-SNIP.