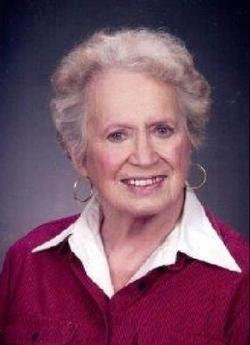 Stoneman, Edna Mae “Heidi” After living a long and storied life Edna Mae ” Heidi” Stoneman slipped away peacefully on Sunday, February 28, 2016. She was born on April 30, 1922 to Albert and Edna Heidenreich in Escanaba. She was the second of three children with an older brother Dale, and a younger sister Carol. Growing up on the shores of Little Bay de Noc, Lake Michigan, Heidi developed a deep love for the out of doors. She and her lifelong friends occupied their time with all Escanaba had to offer such as sailing, fishing, swimming, ice boating and skating. Heidi became so proficient at skating, that at the age of 17 she was asked to join Sonja Henie’s ice skating review. Heidi earned her BS/RN from her beloved University of Michigan’s School of Nursing. She loved to learn new things and fell in love with anthropology after taking a class with a friend. She went on to earn her Master’s degree in this field. Heidi enthusiastically participated in many digs including a mastodon that was discovered in October 1985 in Grandville. Her love of anthropology also led to a trip to Mexico’s Yucatan peninsula to see the ancient Mayan city of Chichen Itza. On June 17, 1948 Heidi married Fernley (Stoney) Stoneman in a ceremony at her parent’s home. She worked as an RN to put her husband through medical school, and she and Stoney later settled in Grandville, to raise their four daughters whom Heidi would claim as her “greatest achievements.” Always involved in her community, Heidi helped organize the League of Women Voters for Grandville. She was a Campfire Girl leader, active in the PTA, and was a past president of the Minnie Cumnock Guild of Blodgett Hospital. She also served as a treasurer of the Kent County Board of Health. Heidi and Stoney enjoyed many activities together, including cheering their Wolverines at The Big House. They were charter members of Sunnybrook Country Club and Heidi golfed to a six handicap. Skiing was another passion for Heidi. The family took many trips north to ski at Boyne Mountain. Heidi and Stoney also went on skiing trips out west with friends and to Switzerland to ski the French and Swiss Alps. Another love for Heidi was classical music. She was a long time member of the West Michigan Opera Society. She and Stoney would travel to Detroit annually to hear the opera. Heidi loved to cook and entertain. She once hosted a dinner party for 100 people — Boyne’s last round-up. She was often the life of the party. Heidi will always be remembered for her strength, spirit, loyalty, stories, and her great love of nature. She would often say she was happiest near the water where she could “drop in a line”. Heidi was preceded in death by her husband, Dr. Fernley Stoneman; brother, Dale; and sister, Carol. Heidi is survived by her four daughters, Heidi Ann, of Colorado, Carol Ann (Leonard) Dibble, of Ohio, Julie Ann (Paul) Jurczak, of Grand Ledge, and Holly Ann, of Grandville; grandson, Christopher (Sarah); granddaughters, Samantha Ann, Natalie Ann, Robin Ann, and Aimee Ann; great granddaughter, Hailey Ann; along with many nieces and nephews. The family especially thanks Robin and her team at Gentiva Hospice and several special staff at Maple Creek for their wonderful care. A celebration of Heidi’s life will take place from 1-3 pm on Saturday, April 2, 2016 at St Mark’s Episcopal Church, 134 N. Division Ave. Grand Rapids. The family will also hold a private memorial for Heidi this summer in her hometown of Escanaba. Memorials in Heidi’s name may be given to the charity of your choice

, University of Michigan School of Nursing Alumni Society Scholarship, or Planned Parenthood of West & Northern Michigan. To share a favorite memory, send a message of sympathy to Heidi’s family, or to sign her online guest book, please visit; www.MichiganCremation.com