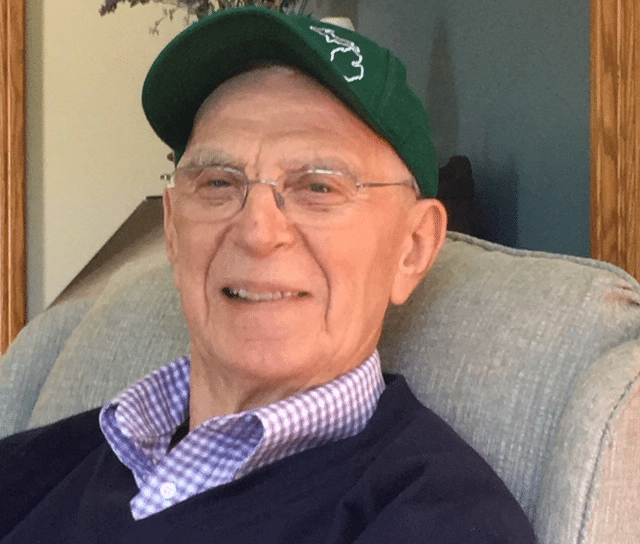 Under the loving care of his family Harold F. Skinner, 82, of Cedar Springs, passed away Sunday evening, November 24, 2019.  A wise, loving, talented, hilarious, faith-filled man – he lived his life grounded in Jesus. Quietly, humbly, profoundly …. he impacted the lives of those who knew him.

The son of Harold Fyle and Bertha Eliza (Freeman) Skinner, he was born on December 10. 1936 in Onaway, Michigan, just a few miles from the Millersburg family farm.  He worked alongside his father and uncle until the age of 18, moved to Saginaw where he worked for a dairy company, then chose employment with General Telephone and Electric (known today is Verizon).  He started as a lineman –finishing his career as part of the PBX (Private Business Exchange) team, retiring after 35 years of service.  Harold was a proud veteran.  He served in the United States Army of Occupation in Berlin, Germany where he witnessed placement of the hand drawn line which marked the location of the soon to be built – and later torn down – Berlin Wall.

For 15 years he passionately served as Scoutmaster of Alpena Troop 78 overseeing a variety of high adventure trips that included The Boundary Waters of Minnesota, Isle Royal in the Upper Peninsula of Michigan, mountain climbing in Philmont, New Mexico, and hiking Lake Superior’s North Country Trail.  From the National Boy Scouts Harold received the highest award a local council can bestow on a volunteer, The Silver Beaver, given to recognize outstanding service to Scout youth.

Harold was a Master Craftsman whose projects included his own homes, wooden toys, spindle cradles, household furniture, even a wood strip canoe (just to see if he could do it).  He was always attentive to wood grains and known for running his hand over an item to assess its smoothness and quality.

Harold was a man of faith.  Unwavering, disciplined, thankful.  Favorite phrases were, “Thank you, Father” and “Praise you, Jesus.”   He gladly served his church family finding his niche in organizing opportunities for men’s fellowship, overseeing the care of church structures and grounds. He cared for people in practical ways:  visitation, building, sharing a laugh, studying the Bible, worship.

Harold was preceded in death by his parents, his wife, Mari Jane (Gard) Skinner on April 10, 1982; and two sisters, Carol Balliet and Patricia Dehring.

To send a message of sympathy to the family, sign Harold's online guest book, or to share a favorite memory, please visit:  www.ChristiansenCares.com