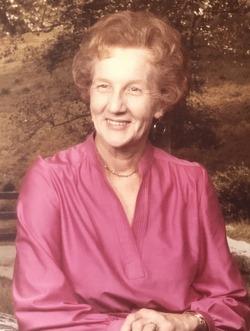 The daughter of Theodore & Wilhelmena (Beute) Steensma, she was born on June 10, 1922 in Grand Rapids.

She lived most of her life in Grand Rapids. Grace was a devoted and loving daughter, wife, mother, and friend. She was preceded in death by her parents, husband, all five siblings and their spouses as well as two daughters in-law, Lauren Russo Borgeld and Noreen Vander Heide Borgeld.

Her early years were spent as a homemaker. She spent hours in her kitchen cooking good food, and as a PTA president for Harrison Park Elementary School. The door to her home near Richmond Park was always open and she welcomed any and all.

In later years, she became a school bus driver for Grand Rapids Public Schools, giving years of service before retirement. Grace has also been an active member of Trinity Reformed Church until her later years when health issues handicapped her activity.

Grace’s kindness and caring touched many lives. She always put others first and worked daily to make the world a better place.

A family service will be held at Holland Home Chapel.

In lieu of flowers, please make any donations to Holland Home Benevolence Fund or Faith Hospice.

Honoring her wishes cremation has taken place. To send a message of sympathy to the family, sign Grace’s online guest book, or to share a favorite memory, please visit: www.MichiganCremation.com