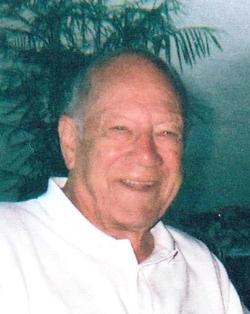 Gordon was born May 18, 1928, to Rockwell and May (Osborn) Drummond.  He was the eldest of five children and a life long resident of Grand Rapids.  After attending the University of Pittsburgh and serving in the U.S. Navy, he returned to Grand Rapids where he worked for the family business, Fisher-Drummond for fifty years.  A natural businessman, Gordon was committed to serving the customer’s needs and to the principles of win-win negotiations for true success.

He was a devoted father, he taught swimming and good sportsmanship to his children and hundreds of others.  He will be remembered for his cheerful presence at Cascade Hills swim meets, on the golf course, and at the card table.  Gordon developed many deep relationships including life long friend, Dick Lacks Sr. and great friend, Paul Creasey.  He gained the respect and admiration of all who came to know him.

To send a message of sympathy to the family, sign Gordon’s online guestbook or share a favorite memory, please visit: www.MichiganCremation.com