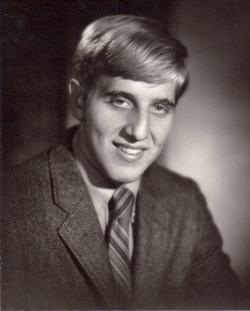 Gordon (Gordy) Goudzwaard, age 64, of Grand Rapids, passed away peacefully on Thursday, March 23, 2017 at Trillium Woods Hospice. He had suffered for many years from the complications of diabetes, which eventually took his life.

The son of Warren E. & Geraldine (Morsman) Goudzwaard he was born on January 29, 1953 in Grand Rapids. Gordon was a 1971 graduate of Union High School and later Grand Valley State University.  Among many jobs, he was employed as a postal worker, refuse collector and water treatment plant technician.

Gordon was proceeded in death by his parents; and his dear brother, Norman (Foogie).  Surviving are his loyal and loving wife, Cindy (Dykman) who selflessly cared for and supported him during his long illness.  They were together for 29 years, during which they traveled and indulged his sense of adventure.  They lived in Grand Rapids, Gladstone and for most of their marriage in Big Rapids.  They lived and promoted the simple things in life.  Gordy was proud of their use of solar panels in helping to preserve the environment and money.  He was keenly interested in politics, sports, current events and geography.  In addition he had an endearing sense of humor and love for Arnold Ziffel (Green Acres) for which he will be remembered.

He is also survived by his sisters, Jane (Ken) Seitz and Susan (Dave) Dooge; mother-in-law, Lynn Kranendonk; sister-in-law, Lisa (Jim) Nagel; brother-in-law, Stephen Dykman; amusing and aptly named dog Spunky, who provided unconditional love; as well as many nieces, nephews, cousins, and friends. The family would like to extend a special thanks to the compassionate care given by the staff of Faith Hospice and Trillium Woods.

In lieu of flowers donations can be made to Faith Hospice.