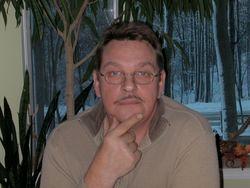 Gerd Gustav Reuss, passed away peacefully in his home on Sunday, March 13, 2016.  He won many battles fighting cancer with his strength and dignity and passed, surrounded by his wife and family, who he cherished above all. He has moved on to his next adventure with Perry Rhodan and Cookie.

He was born in in Pforzeheim, Germany, April 12, 1955.  His Mother, Margarte, was a radio operator during the war. As a child he had memories of the destruction and rebuilding in his hometown.

Much of his childhood was spent with his Oma and Opa.  From his Opa he learned the life skills, values and dignity that he lived by.   As an older brother he was always there for his sister (Heide); playing train, reading Perry Rhodan, teaching her to sew and garden.When he got older he formed a lifelong friendship with Peter Ehricke.  They shared many life experiences as boys to men; trips to the public bathing pool, first car antics and walking the streets of Pforzheim with French champagne, just to name few.

In 1977 he moved to Grand Rapids, Michigan to marry and start his career as a Master Machine Builder.  He worked in several places including; Kelvinator, Steelcase and Imperial Design.  Because of his skill and perfection everyone sought his expertise.  He used his craftsmanship throughout his life, for work, family and friends.

What mattered most to Gerd was the whole package, his wife, Janet, his home; his family; good food and hard work, were everything to him.  Gerd always made others feel cared for and safe. He was passionate about model railroading and landscaping.  His lawn was like green velvet.  Neighborhood kids knew they were not allowed to walk on it.  His stature and German mannerisms could be startling at first, but once you were around him for any length of time, you could feel the gentleness of his soul. He left such an impression with anyone who met him. He will be missed by so many.

The Reuss family wishes to thank the entire Hospice of Michigan Team, for their tender loving care and support; and the staff at Lacks Cancer Center.  Memorial contributions can be made to Hospice of Michigan; in lieu of contributions, to honor Gerd; plant a tree, perennials, help a friend with a home project, spay and neuter your animals, adopt a homeless pet and always pay it forward!