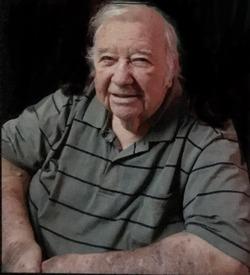 Gary Lee McQuillian, 83, of Lyons, went to be with his Lord and Savior on Friday, April 13, 2018 peacefully at his home. The son of George & Marion (Maus) McQuillian, he was born April 8, 1935, in Lyons.  After graduating from Lyons High School, Gary joined the Michigan National Guard and later enlisted in the United States Navy.  On St. Patrick’s Day, March 17, 1958, he married Harriet Parks and together they enjoyed 60 years of marriage.

He was preceded in death by his parents;  a son, Kelly Lee McQuillian; his brother, George (Chuck) McQuillian; his step-father, Clifford Ross; and several nieces and nephews.

Gary retired from TRW of Portland after 42 years of service. He was a member of Lyons-Muir Lions Club and Lyons-Muir Historical Society. Gary enjoyed traveling on his motorcycle with best friends Chuck and Carol Babcock.

Memorial services will be held at a later date. To send a message of sympathy to the family, sign Gary’s online guest book, or to share a favorite memory, please visit: www.MichiganCremation.com

Instead of flowers, contributions in Gary‘s memory may be directed to Ionia Area Hospice, Lyons-Muir Lions Club and Lyons-Muir Historical Society.