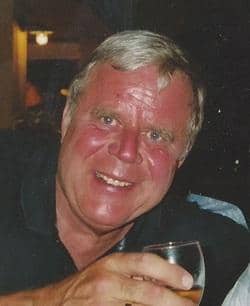 Gary Arnold Culver passed away on Thursday, January 23, 2014 at the age of 70. His loving wife, Lin, was with him when he died and she and his furry friend, Brittie, are missing him desperately. Gary spent his last days under Hospice care, surrounded by caring friends and family members. He was preceded in death by his parents, Arnold and Cecile (Nielsen) Culver of Hart, and by his brother-in-law Dick Carstens of Scottville. In addition to his wife, Lin, Gary is survived by his brother David (Marie) Culver of Hart, sisters-in-law Donna (Bill) Dyson and Judy Carstens; niece Anya (Val) Gorzynski and nephew Jacob Carstens.

Gary was raised in Hart, Michigan where he learned to fish and tie flies, pick cherries, bale hay, play sports and build things. He was a top student and an athlete at Hart High, earning all-conference honors in basketball and all-state in football. Summers were spent at a cottage in Baldwin and his dad, a homebuilder, kept Gary in shape for sports by having him haul bricks and roofing supplies and mix concrete.

Working with his dad led Gary to a lifetime in the construction industry. He earned degrees in civil engineering and business administration at Michigan State University (go green!), where he and his fraternity brothers had a grand time and many misadventures. After school, he enlisted in Navy OCS and joined the Seabees. He proudly served in Vietnam and Italy, and then came home to begin a career in construction management. He leaves a legacy of high-end commercial, residential, and hospital projects in the Grand Rapids area.

Gary had a fine mind and many interests and talents: He loved nature, plants and landscaping, had his own vineyard, and produced some excellent wines. He was an inventor, designer and craftsman who loved woodworking and made beautiful and unique boxes and sculptures. After retiring, he also pursued painting and pottery. He had a lifelong love of MSU, travelled widely and was fluent in Italian. Gary was crazy about music (Bob Dylan), and art, cooking, riding his motorcycle, digging in the dirt, photography, reading and entertaining, and he was the world’s