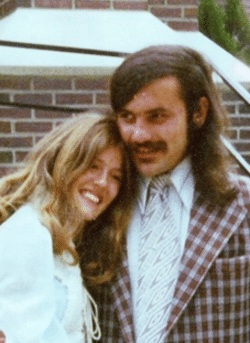 Frederick Joseph Boehm II, passed on Thursday, January 8, 2015 at Faith Hospice at Trillium with his son Max and his sister Susan at his side, his rosary and a picture of his wife in his hand. Fred was born on October 23, 1951, the first child and son of Robert F. Boehm and Reid E. (MacMillan) Boehm, in Fort Collins, Colorado, while his father attended Colorado State University. His sister, Rebecca, (deceased) was the second member of the family. The family later moved back to New Jersey and New York where Fred attended elementary school and high school. There the family expanded with four more children, Michael Robert Boehm of Plattsburg MO, Eric Paul Boehm of Hartford CT, Susan Ann Boehm of Pine Lake, MI and Richard Joseph Boehm of Delton, MI. The family then moved to Liberty, Missouri where Fred graduated from Liberty High School in 1969. It was there where Fred met his wife, Lisa (Mitchell) Boehm. They were married in June of 1974 until Lisa passed in August of 2010.
Fred and Lisa raised their four children at Pine Lake, Michigan, (Prairieville Township) where they resided for over 40 years. Fred worked at the Michigan Career Technical Institute in maintenance for much of that time. The love of the outdoors and nature was Fred’s passion that he shared with his children. Fred enjoyed the simple things in life, family, old movies, old television shows, hunting, fishing, coin collecting and a good beer with a steak.
The children of Fred and Lisa, Joseph Maximillian Boehm and partner Kevin O’Neil of Grand Rapids, MI, Andrea Boehm and partner Rob Brannon of California, William Boehm and wife Jill of South Dakota and Cathy Boehm (Moore) with husband John of Cloverdale, MI. All came together to hold a quiet family memorial to honor both their mother and father. Fred did not want anyone to have the burden of funeral expenses so he asked not to have a service and simply place him to rest by the love of his life, Lisa.

Fred leaves this journey of life with grandchildren, Kelsey Moore, Adain Brannon, Ethan Brannon and Alyna Boehm.
Preceded in death by his parent’s Bob and Reid Boehm, his uncles, Richard J. Boehm, Alfred Boehm and William Boehm, Fred have many endearing nicknames, including Fritz by his Uncles and Lardbutt by his Mother. (Fred always moved at his own pace and our Mother took notice). Fred is a now a missing piece of the once called, “pentagon” of his four other siblings.
No longer in pain from so many ailments, heartbroken at your loss of Lisa, you are now free and with Lisa. God Bless.