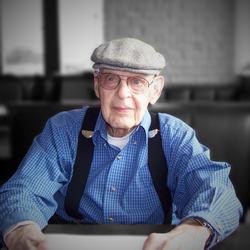 Francis “Frank” G. Carpenter, age 86, of Wyoming, passed away on Saturday, December 26, 2015 at home under the loving care of his family and Heartland Hospice. The son of Robert & Ethel (Clark) Carpenter,  he was born on August 7, 1929 in Ada, Oklahoma.

A part of “the greatest generation”, Frank survived growing up during the Great Depression, in the Great Dust Bowl of the American Midwest, living amongst a variety of family and friends in rural Oklahoma until he was old enough to join the military. He proudly served his country during the Korean and Vietnam wars in the United States Navy. After returning home he served in the Navy Reserve, from which he retired, and concurrently worked over 40 years for the Federal Government in Property Administration and Inspections.

Frank was also a talented cook who loved to share his meals and learn from a variety of cooking programs. He wasn’t afraid to experiment with new cooking techniques and tools.  He loved to travel and enjoyed sharing stories of his adventures.  You would also find Frank in the garage building or repairing something, so that it would last.  A couple times a week during the Summer you would see Frank on his John Deere lawn tractor, and during the Winter bundled up while keeping the drive and walkways clear.  He was a working man who loved to stay busy.  Many people might be surprised to know that Frank was also a Freemason and Shriner for over sixty years.  He would volunteer at children’s fund raisers, usually as a clown or Santa Claus.

Frank loved his family.  He was preceded in death by his mother; and a brother.  Surviving are his loving wife of 39 years, Irene Carpenter; children, Ronald Carpenter, Beverly Turner, James Carpenter, Samay Rehfeldt.

Visitation is from 9:00 a.m. to 12:00 noon on Saturday, January 2, 2015 at Michigan Cremation & Funeral Care, 3627 Linden Avenue S.E., which is off 36th Street (one block west of Eastern Avenue), Grand Rapids, where memorial services will be held at 10:00 a.m. on Saturday.  Military honors will be rendered by the Kent County Veterans Honor Guard.

The family wishes to extend their heartfelt thanks to, the Veterans Administration for their years of care, guidance, and support; especially to Camilla Martin, to SarahCare for their care and support, and to Heartland Hospice of Michigan for their compassionate care and guidance.  A special Thank You to family, friends, and neighbors who had been active in Frank’s life.