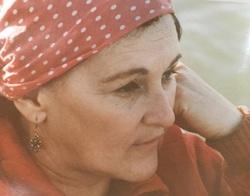 Frances (Seguin) Culver Ales passed away Wednesday, November 23, 2016 at the age of 90. She was born to Alexander and Eleanor (Callahan) Seguin, in River Rouge, on April 12, 1926, she was the youngest of 12 children. Frances attended Our Lady of Lourdes Catholic School in River Rouge, and often visited New York City in the summers, where she developed her love of music by meeting many of the musical greats of the era. Frances loved roller skating and dancing. She was crowned Roller skating Jitterbug Queen of Detroit at the Greystone Ballroom in 1943, and also danced in the chorus line for Duke Ellington at the Cotton Club in New York City.

She married Boyd H. Culver on April 12, 1945, and together they raised five children. Boyd passed away June 3, 1974. She married Matthew Ales on February 29, 1976. They lived in Newark, Ohio; Monterrey, Mexico; Asheville, North Carolina; and ultimately Brethren, Michigan. She traveled around the world with friends and family with her favorite destinations being Spain and Italy. Frances enjoyed music and entertaining, crocheting, and spending time with family.

Visitation with the family is from 2-3 p.m. on Saturday, December 10, 2016 at Michigan Cremation & Funeral Care, 3627 Linden Ave. S.E. at 36th Street (one block west of Eastern Ave.), Grand Rapids, with a Rosary Prayer Service beginning at 3:00 p.m. The Rev. Father Thomas Cavera, parochial vicar of St. Jude Parish, will preside and a luncheon will follow.