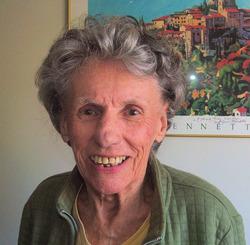 Frances (Fannie) R. Golder, age 86, a long-time Michigan resident, passed away Monday, April 10, 2017. The daughter of late Sidney and Elizabeth (Sneddon) Parkes she was born on June 6, 1930 in Detroit.

She spent her early childhood in Detroit, then moved to England with her parents in 1938. On June 6, 1944 she started full-time work as a payroll processor and then later as a switchboard operator. In 1947 Frances met George and they married in 1949. In 1953, Frances and George decided to move to the U.S. Along with son David they moved to Warren, MI then eventually purchased a home in Clinton Township, where son William was born in 1966. In 1969 the family moved to Shelby Township. Working until her retirement in 1992, Frances spent most of her career as a sales and marketing support manager at Lionel Trains and Fundimensions in Mt. Clemens.

She was well liked and respected by her co-workers, making life-long friends with many that she worked with. Sunday dinners were an important time for Frances and she enjoyed preparing English style food for family and friends almost every Sunday for many years. She and George would often host parties and family gatherings at their home, and they loved to work together on their beautiful English garden in the backyard. In addition to her love of gardening, she spent many years building up an impressive collection of English Toby Jugs that were always on display in the home. In 2011, after George passed away, Frances moved to Grand Rapids, where she lived close to William, Susan and her grandchildren Claire and Coleton. Friends and residents of her senior living community remember her for her warm smile and toughness through her physical challenges in her later years. Most of all, Frances was a devoted family woman who loved George deeply and had a close relationship with her sister Margaret. She worked hard, along with George, to provide excellent opportunities for David and William. Her grandchildren were also a special source of joy. She loved giving them special treats or sneaking a few dollars into their pockets whenever she could.

Frances was preceded in death by her husband of 61 years, George W. Golder; and her sister, Margaret Robinson (Parkes) in 2006. Surviving are her two sons, David (Adrienne) and William (Susan); as well as grandchildren, Claire and Coleton. Frances will always be remembered as a loving wife, mother, grandmother, aunt and friend.

Family and friends are welcome to join the gathering of celebration for Frances’ life from 2-4 pm on Saturday, June 3rd at Rochester Mills Brewing Company, 400 Water Street, Rochester.

In lieu of flowers memorial donations can be made to Hospice of Michigan, www.hom.org. To sign Frances’ online guest book, or to share a favorite memory, please visit: