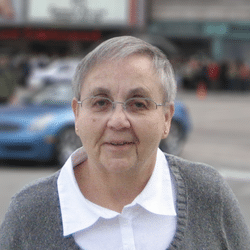 Elsbeth B. Eames “Betty”, age 88, of Grand Rapids, passed gently and peacefully into the arms of Jesus on Saturday morning, November 18, 2017 at Mercy Health St. Mary’s surrounded by family. Betty contracted a serious infection earlier in the week which progressed into her system and ultimately took her life.

The daughter of Albert & Adeline (Haag) Bandli, she was born on June 28, 1929 in Eau Claire, WI and grew up on a dairy farm near Canton, WI. Betty resided at Raybrook in Grand Rapids, since 2009 but always considered Green Bay, WI to be her home.

A memorial service will be at 11:00 A.M. on Saturday, November 25th at Raybrook Chapel, 2121 Raybrook St. S.E., Grand Rapids. Arrangements are also being made for a celebration of her life to be held in her beloved Wisconsin during the summer of 2018.

Memorial contributions may be made to Special Olympics of Northern California  https://www.sonc.org/

Honoring her wishes cremation will take place. To send a message of sympathy to the family, sign Elsbeth’s online guest book, or to share a favorite memory, please visit: www.MichiganCremation.com