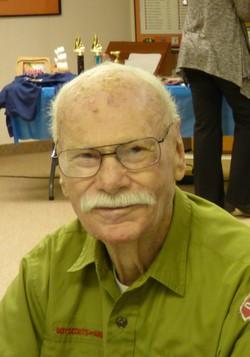 Eaton Vale Kelly, age 94, formerly of Detroit, passed away on Thursday, December 7, 2017 peacefully at his daughter’s home in Zeeland. The son of Harold Vale & Sophia Roselia (Eaton) Kelly, he was born on Friday, July 13, 1923 in Pontiac.

Eaton was proud to call himself a “Tin Can Sailor” having served in the U.S. Navy during WWII. He was a Plank Owner aboard the U.S.S. Charles J. Badger as a Fire Controlman earning 4 stars during the Asiatic-Pacific Area Campaign, and 2 stars during the Philippine Liberation.

He graduated from the University of Michigan with his Masters Degree in Electrical Engineering. Eaton worked at Detroit Edison for 36 years in the Meter Department. He was a longtime active member and past commodore of the Edison Boat Club, instrumental in forming fleet #8 of the Flying Scot Association. He was an intense competitor and enthusiastic teacher of sailing. After retirement he enjoyed being a snowbird and spending the winters in Key West, FL.

Eaton had a lifelong involvement with the Boy Scouts of America as a boy, scoutmaster, assistant scoutmaster, and troop summer camp. He assisted with maintenance, launch and storage of sailboats at D-bar-A Scout Camp, where they honored him by naming a dock after him.

He was preceded in passing by his wife, Margaret (MacRae) Kelly; parents; and his siblings, Anna, and Bill. He is survived by his children, Kenneth Kelly, Karen Slippy, Christopher (Cheryl) Kelly, and Marilyn (Allyn Abel) Kelly; brother, Frank (Betty McReynolds) Kelly, of Lake Havasu City, AZ; as well as 4 grandchildren, and 2 great-grandchildren.

Honoring his wishes cremation will take place. To send a message of sympathy to the family, sign Eaton’s online guest book, or to share a favorite memory, please visit: www.MichiganCremation.com