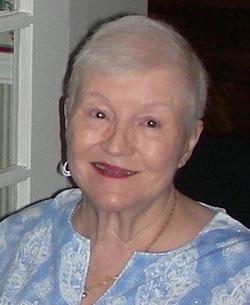 Dorothy Leone Reinhardt, age 91, of Kalamazoo, passed away on Friday, October 16, 2015, at Rose Arbor Hospice in Kalamazoo. The daughter of Emerson and Hazel (Rhoads) Russell, she was the oldest of five children, and was born on December 9, 1923, in Rogers, Arkansas. She was a civilian nurse in an army hospital in Camp Crowder, MO, when she met her husband Mark Lee Reinhardt, a second lieutenant in the US Army Signal Corps, during WWII. They were married on April 21, 1945, for 66 years, before his death in 2011. During most of their marriage, they lived in Chicago, IL and Midlothian, IL, where she was a homemaker and raised their three children. Dottie was an avid Bridge player, loved to sew and quilt, and enjoyed reading and baking. She was a sweet and kind person and will be remembered fondly and missed by many. She was preceded in death by her parents; sister, June Steele; brother, Alan Russell; husband, Mark; and her son, Russell. Surviving is her daughters, Nancy Colantonio and Linda (Jim) Duffy; daughter-in-law, Debra Reinhardt; sister, Lillian Applegate; and brother, Charles (Peg) Russell. Dottie had four grandchildren, Kathryn and Rudy Colantonio, Damion (Laura) Reinhardt, Mark Adam (Amber) Hubchenko; and four great-grandchildren. Graveside services will be held at the family burial site in Grovertown, Indiana, at a later date.