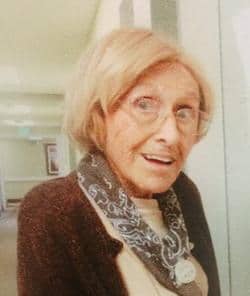 Dorothy Ann Lucey, age 90, of Caledonia, formerly of Lakeport, passed away on Saturday, November 1, 2014. The daughter of Charles and Ida (Weimer) Gauntner, she was born on January 7, 1924 in Cresson, Pennsylvania. As a young girl her large family of seventeen brothers and sisters moved to Cleveland, Ohio and after graduating from high school in 1943, she worked for the White Motor Co. as a draftsperson drawing parts for tanks used in World War II. Dorothy continued her drafting skills at Electric Comptroller Mfg. and then at Kaiser Fraser Mfg. in Detroit until her first child was born.

Dorothy shared 63 years of married life with Richard, who passed away July 12, 2014 just 111 days before her death. She was also preceded in death by an infant son, William. Surviving are her children, Mark (Karen) Lucey, Sue (Jim) DeHaan, Clayton Lucey, Terri (J) Miller; six grandchildren, Jason (Holly) DeHaan, Erin (Jeff) Hills, Zach and Lexi Lucey, Jacob and Joel Miller; and two great grandchildren, Evan DeHaan and Emily Hills. Not wanting to leave her husband’s side, Dorothy and Richard will in buried together at Mt. Elliot Cemetery in Detroit. A family celebration of Dorothy’s life will be held in the spring.