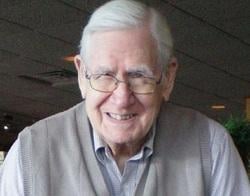 A proud U.S. Navy veteran, Don served during World War II. Prior to his retirement, he owned and operated Donalco Trucking Company, a freight transport company. Don had many and varied interests and enjoyments during his lifetime including politics, reading, healthy living, dancing, using his computer and playing pool with friends at the senior community center.

Surviving are his daughter, Pamela Picazo to whom he was devoted; grandsons, Andrew and Matthew Picazo, all of California; sister, Marjorie Blaszak; nieces and nephew, Sherry Marckini, Cathy Kelly, and Gary VanBuskirk; along with several great nieces and nephews and cousins.

The family would like to thank the staff of 2Blue and 2Red at the Grand Rapids Home for Veterans for the excellent care they  provided Don during the past 2 years. Special thanks to staff member Noah Hauke with whom Don found a special bond and to cousin, Linda Stewart Conlon, for the invaluable support  of time, attention and knowledge she provided to Don for the past  two years .

As Don wished, cremation has taken place and a private burial service will be held at a later date.  To send a message of sympathy to the family, sign Donald’s online guest book, or to share a favorite memory, please visit: www.MichiganCremation.com