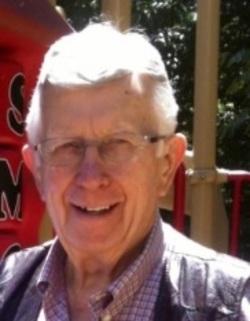 Donald C. Peterson, age 84,  passed away on Wednesday, January 6, 2016 in St. Joseph, MI. His wife, Marilyn Peterson, his “Queenie”, for whom he cared daily during her long battle with Parkinson’s disease, went before him in October, 2009.

He was an enthusiastic businessman who liked to be in charge, mainly because he enjoyed helping others, was a proud veteran of the U.S. Army Reserves, and began his career in the business forms industry, in a series of increasingly responsible sales leadership positions through owning his own company beginning in the late 1960’s. Over the course of his career, he was in sales with Wausau Homes, Chikaming Township Supervisor and the Executive Director of Retirement communities in Florida and California.  He spend his retirement years in Bethany Beach in Sawyer, at Covenant Village of the Great Lakes in Grand Rapids and, finally at Woodland Terrace in Bridgman.

Don is survived by his brother, Harold  Peterson; five children, Bruce (Kimberly) Peterson, Mark (Jacquie) Peterson, Daryl (Fritz) Hegendorfer , Deb (Mike) Seelig, and Joe Peterson; eleven grandchildren; one great-grandchild; along with many foster children who were so numerous that in his latter years he couldn’t count them all.

We will remember him for his love of his wife and family, his pride in his family, and collection of carved eagles.  He delighted  in being  a Mr Fix-it.  He loved to joke and tease and tell tall tales of the summers in Alaska in his teens.  Oh, yes. And his sense of fun and adventure! Rest in peace, Dad. We’ll miss you.

Private family graveside services will be held at a later date.