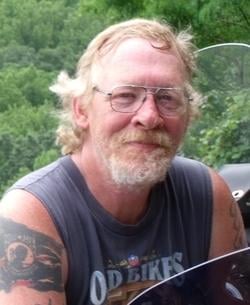 David Victor “Curly” Wright, age 53, of Pierson, formerly of Wayland, passed away peacefully on Thursday, May 14, 2015 at his home.

Born in Grand Rapids on December 12, 1961, he married Caren L. Cook on September 16, 2000 and he enjoyed riding his Harley-Davidson either alongside his wife and with family and friends, as well as bow and rifle hunting, whitewater rafting, camping, and quiet walks through the woods. He attended Resonate Church in Newaygo.

He was preceded in death by his mother, Karen Rae (Bistodeau) Zylstra; and by a brother, Robert Henry Zylstra.

Envelopes for memorial contributions to the family will be available at the funeral home. To send a message of sympathy to the family, sign Dave’s online guest book, or to share a favorite memory, please visit: www.MichiganCremation.com