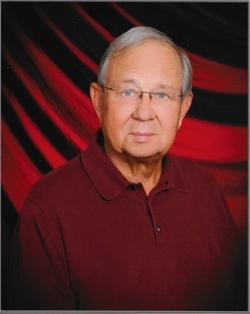 He grew up in St. Joseph, graduated from Lake Michigan Catholic High School, earned a bachelor degree from Western Michigan University and was a member of Tau Kappa Epsilon.

After college David served honorably in the United States Army Reserve. David met the love of his life M. Colleen Brady and they were married Feb. 4th, 1967. David and Colleen had two sons while living in Dowagiac, David and John. He started his career at Overton Machine Works in Dowagiac, rising quickly to become vice president and general manager of the business.

In 1976, David moved to Grand Rapids to work for Werner Lahara /APV Baker where for nearly 30 years he traveled extensively across the United States and to six continents in support of the business. After retiring in 2005, David and Colleen split their time between their homes in Grand Rapids and Wildwood, FL. David was a member of St. Jude’s Parish in Grand Rapids and a member of St. Vincent de Paul Church and the Knights of Columbus council #13300 in Wildwood, FL.

David was a loving husband, father and “Poppy” to his four grandchildren. His greatest joy was in his family for whom he always provided love, guidance, support, humor, and pride in their accomplishments. When not working he enjoyed golfing, boating, volunteering in politics, and traveling, but most of all he enjoyed his time with his family, extended family, and friends.

David was preceded in death by his parents Ralph and Evelyn Wenger of Lakeside, his father and mother-in-law John and Betty Brady of Cassopolis, his brothers-in-law Tony Friesl, Robert Brady, and sister-in-law Sheila Brady.

Honoring his wishes, cremation has taken place.  To send a message of sympathy to the family, sign David’s online guest book, or to share a favorite memory, please visit: www.MichiganCremation.com