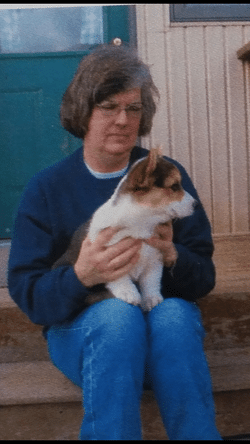 Christine Cecelia Ratke DVM., age 70, of Bloomingdale, passed peacefully on Wednesday, January 11, 2017 into heaven at the Rose Arbor Hospice House, Kalamazoo.  She fought a valiant fight to continue to live and enjoy her family, friends and all the lovely Corgi’s , Borzoi’s and one Chart Polski that were her family.

The daughter of Clement Joseph & Rosella Cecelia (Ozga) Ratke, she was born on September 25, 1946 in Royal Oak.  Chris was a very accomplished professional having attained her Bachelor of Science, Honors College, Michigan State in 1968; DVM degree from Michigan State in 1969; Doctor of Philosophy in Pathobiology (Phd) in department of Pathobiology and Diagnostic Research 1981. She obtained a Certification in the American College of Veterinary Pathologist, she was a professor of radiology at MSU for several years. She also was in private practice on the east coast for a few years, she then went to work at Upjohn in cancer research. This knowledge allowed her to have valued input to her own treatment through the years fighting Malignant Melanoma. When Upjohn sold to Pfizer she decided to leave research and live on her farm and raise dogs.

Caritas kennels was born and she continued to raise champion Corgi’s and Borzoi’s. Chris really enjoyed dog shows because of her friendship with her doggy colleagues which was so phenomenal. She liked everyone and was so kind to newcomers. Chris was easy to like, she was generous and fun to be around. She will be missed by so many of us that were fortunate to call her a special friend. She raised many champions and was responsible for others becoming successful in their breeding programs. She imported dogs from Australia , Sweden, Netherlands and Poland. Chris would stop at nothing to help one of her dogs survive. She would do whatever was needed to care for her beloved animals.

She was preceded in death by her parents; brother, Robert; and a very good friend, Edward De Young. Surviving are her sister, Bernadine Gregor; four nephews, James, Mark, John and Dan; very close friends, Denise Pucilowski, Davie Thompson, and Carol Ecker, DVM. as well as many friends who were like sisters to her.

We want to especially thank the oncologist Dr. Suzanne Hayman from The Mayo Clinc who worked with her on a personal basis through Chris’s 12 years of an uphill battle to survive in remission through the years of living with a terminal disease. She was a constant patient who never gave up through all of the bone marrow transplants, stem cell, transfusions, chemotherapy, experimental treatments, radiology and all the other painful procedures she endured to live her life. She had such a positive attitude even when the pain was excruciating toward the end. Her animals were her main concern and several friends stepped up to assure her that all of them had good forever homes. Many of us brought dogs to see her at Rose Arbor so she could visit them.

A memorial service at the Kalamazoo Cluster, will be announced at a later date.