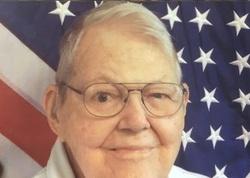 Edmonds, Carl, P.E., age 96, passed away on February 3, 2017. Born in Hastings, Carl was WWII Air Force Veteran serving as a Transport Pilot in the Alaskan Theater. During his last six months there, he was the personal pilot for General Simon Buckner, Commander of the Alaskan Ground and Air Defense. He obtained the rank of Captain while in the service. A University of Washington graduate, he became a registered Civil Engineer and later was employed by the City of Grand Rapids, retiring from there after 21 years.

Carl was an avid golfer, deer hunter, fisherman and traveler. He also was a crack pistol shot and continued to go to the shooting range until age 90.

A Memorial Service will be held at Mars Hill Bible Church, 3501 Fairlanes Ave. S.W., Grandville, Room 403, South Entrance, Thursday, February 9, 2017 with visitation at 11:30 a.m., and service at 12:30 p.m., a luncheon will follow. In honor of Carl, please do an act of kindness for someone. A special thank you to Spectrum Hospice and Sheldon Meadows for thoughtful care.