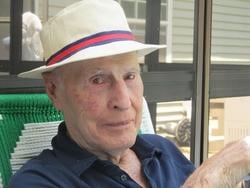 Calvin Maurice Madden of Battle Creek went to be with the Lord on December 3, 2013, with his family by his side. He was born in Lamotte Township, Michigan on March 10, 1924 to Claude and Florence Madden. He retired from Eaton Corporation after 30 years of service. He enjoyed flying his plane. He loved watching the Detroit Tigers, and walking his best friend, Shadow (his dog.) In his younger years, he enjoyed hunting and fishing, and loved to take his children camping. He was a jack-of-all-trades, and could build or repair most anything.He was a 1st Lieutenant in the Civil Air Patrol, and a lifetime member of the Disabled American Veterans.He served in the Army as a firefighter during World War II and was in the invasion of Normandy and served in Northern France.

He is survived by his wife of 65 years, Billie Madden; and children Joyce (Frank), Dan (Rhonda), Sandy (Dave), Nancy (Tom), Janet (Fred), and Larry (Sharon.) He is also survived by his sister, Lorena; 14 grandchildren and 14 great grandchildren. He was preceded in death by two sisters, a son, Steven, and great grandsons, Jerry and Adam.

A Memorial Service was held on December 10, 2013 at the Ft. Custer National Cemetery. Memorial tributes may be made to the Calhoun County Animal Center or the Disabled American Veterans, Chapter 7, Calhoun County.