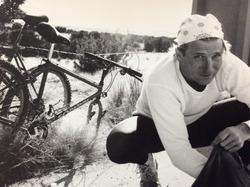 Brian James Gonda, age 51, of Portage, passed away Thursday, March 23, 2017 at Rose Arbor Hospice with his wife by his side. Brian was tenacious in life and death—a persistent, loving, and lasting spirit—and will be greatly missed by his family and many friends.

The son of Bernard Joseph & Betty Jane (Lang) Gonda, he was born on April 14, 1965 in Elkhart, IN. Brian grew up in Johnstown, PA with his four siblings, Bernie, Barb, Bev, and Brad as well as grandparents, aunts, uncles, and cousins. The family moved to Los Alamos, New Mexico for Brian’s senior year of high school and he attended the University of New Mexico in Albuquerque where he discovered cycling and storytelling, two lifelong passions. After graduating college, he met his future wife, Gillian (Kennedy), at KNME-TV, the local public television station where he contributed to many local documentaries. He soon found a passion for photojournalism and worked for Albuquerque news stations KOB and KRQE, receiving numerous awards for his coverage of events both national and local, including the 1995 Oklahoma City bombing and the 2002 Winter Olympics in Salt Lake City. He formed lasting friendships with many colleagues during this time of creativity and professional pride.

Brian and Gillian were married in 1994 in the hills of Placitas, New Mexico. His son, Dylan James was born in 1995 and his daughter, Sarah June was born in 1998. The family moved to Atlanta, Georgia where Brian was a prolific freelance videographer and producer with many nonprofit and corporate clients and regular contributor to WSB-TV and Georgia Public Broadcasting. Brian, Gillian, Dylan, and Sarah moved to Kalamazoo, Michigan in 2008 and Brian enjoyed a brief freelance period working on environmental projects including single-handed production of the television documentary Michigreen. He soon found his home at Public Media Network where he mentored numerous interns and production staff and contributed to its growth in local event coverage especially for the local symphony and USTA national tennis tournaments. His second daughter, Charla Jane, was born in 2011. Feeling complete, Brian and his family put roots down in Michigan and traveled the state, camping, bike-riding, fishing, kayaking, and forging new deep friendships and enjoying countless adventures.

A devoted husband and a loving and extremely proud father, Brian consistently celebrated his kids and their accomplishments large and small while still offering guidance, suggestions, and unwavering support when things went awry. From the very beginning, Brian embraced fatherhood and family life and was enthusiastic wherever they went and whatever they did. Brian was an inspiration and joy and amazed everyone with his bravery and relentless positivity in the face of adversity with his cancer diagnosis in 2014. Brian was  “a rock,” and he also had a great sense of humor and an incredible wit. His zest and zeal for life was infectious, and everyone who really knew him was grateful they did. In a word (or two), his close family and friends described him as ferociously funny, irreverent, immense, sincere, wonderful, loving, a gracious and indomitable spirit, vibrant, strong, grounded, caring, a cool dude extraordinaire, a love warrior, kind, likeable, unassuming, a mentor, partner, a beacon, delightful, kind hearted, hilarious, genuine, funny and solid, crazy adventurous, a voice of moderation, a peacekeeper, sincere, patient, mischievous, and always devoted to family.

Honoring his wishes, cremation will take place. There will be no formal services, rather a life celebration will take place at 2pm on April 15th at the Gonda home in Portage, MI. Please contact Gillian Gonda for more information. In lieu of flowers, donations to Fight Colorectal Cancer in Brian’s honor would be sincerely appreciated.