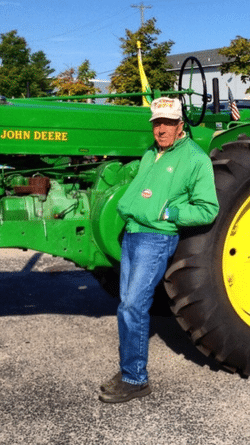 Bernard Frederick Wieringa , age 87, entered his heavenly home on Thursday, April 30, 2015. He was born on July 13, 1927, along with his twin sister Bernadine, to Frederick Bernard and Hazel Adelaid (Baird) Wieringa.

Bernard was a 1945 graduate of Thornapple Kellogg High School, where he drove a school bus at the same time he was a student. Upon his graduation, he continued to drive for the district. After serving honorably in the U.S. Army Constabulary, Bernard farmed the Wieringa Centennial Farm, first purchased in 1913, on Whitneyville Road.

After retirement, Bernard & Alice enjoyed traveling the world together. Their journeys took them to Europe, Australia, Alaska, Hawaii and many other destinations around the world. A member of the Barry County Gas and Steam Club, he also restored John Deere tractors and delighted in driving one of his tractors across the Mackinaw Bridge numerous times.

He was preceded in death by two sisters, Margery Williams and his twin, Bernadine Reaser; a sister-in-law Mary Tolan; and brothers-in-law Charles Williams, Harry Reaser, Dick Wilcox, and Harry Williams.

Visitation with the family will begin at 11:00 a.m. on Monday, May 4, 2015 at Peace Church (6950 Cherry Valley Road, Middleville) where memorial services will be held at 12:00 noon with Pastor Adam Barr, officiating. After the services, the family invites friends and guests to a time of food an fellowship. In lieu of flowers, donations in Bernard’s name may be made to Peace Church. To sign Mr. Wieringa’s online guest book or share a favorite memory, please visit: www.MichiganCremation.com