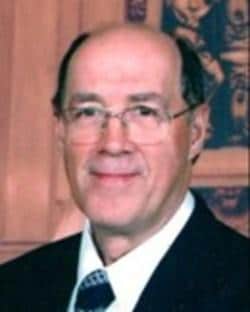 Bernard Jay Wernette, age 73, passed away at his home on February 18, 2019 after a valiant battle with Glioblastoma brain cancer. He was a kind and loving husband, father and grandfather who will be greatly missed. Bernie played basketball at Remus High School. After studying architecture at Ferris College, he worked for Daverman Associates. Bernie was soon drafted into the army and sent to Vietnam in 1967. He was wounded in battle and awarded the Purple Heart. He was also awarded an Army Commendation Medal and two Bronze Stars. After his discharge, he came back to work at Daverman in Grand Rapids. He was involved in many architectural organizations during his working years. He also designed and built his own home in Marne. Bernie was an avid hunter who usually bagged one or two deer a year. He and his wife enjoyed travel and visited all 50 states plus much of Europe and the Caribbean. After retirement at age 62, Bernie volunteered for Blandford Nature Center and Ottawa County Parks. He was preceded in death by his parents Leon and Frieda Wernette and his brother Richmond Wernette. He is survived by his wife Susan, daughter Amy Wernette, son Brian (Angie) Wernette, and grandchildren Benjamin Handshoe, Nicole Wernette, and Andrew Wernette. He is also survived by his brothers Vincent (Alice) Wernette and Gary (Tamera) Wernette, sister Karen Wernette, and sister-in-law Mary Ann Wernette. There will be a military burial at Fort Custer National Cemetery at a later date.

To send a message of sympathy to the family, sign Bernard’s online guestbook or to share a favorite memory, please visit: www.MichiganCremation.com