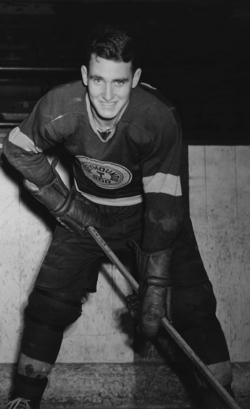 Share
Tweet
Share
Bernard Allan (Rusty) passed away peacefully at home with his family
by his side on March 8, 2017. He was born on August 12, 1930 to
Donald and Annie (Inch) MacIver in Rydal Bank, Ontario, Canada. At
the age of 4, he moved with his family to Blind River, Ontario, which
was always home to him.
He is survived by his sons Mark (Mary Kay) MacIver of Big Rapids,
MI and Paul (Mary) MacIver of Ft. Gratiot, Michigan, grandson
Andrew (Kristen) MacIver of Marquette, Michigan and granddaughter
Karissa (Jason) Leach of Ruby, Michigan, brother Glen (Buddy)
(Yolande) MacIver, sister Doreen Timmermans and Joanne
Panabaker all of Blind River, Ontario and many nieces and nephews.
He was pre-deceased by his wife Paula, his parents, his sister Verna
and her husband John Hoeburg, sister Donna and her husband Emil
Eastman and brother-in-law Paul Panabaker.
Growing up in Blind River, he enjoyed hunting and fishing with his
father and brother. He remembered fondly bagging his first deer with
a perfect shot at the age of 13 – a 200 lb, 6-point buck. Rusty also
worked as a teen at the McFadden Lumber Mill during the summers
to help support his family. In 1943, his family purchased property
east of Blind River and established the Mississaugi Motel, which is
still operated by the MacIver family as the MacIver Motel.
As a young boy, Rusty received a Toronto Maple Leafs sweater for
Christmas, along with a pair of homemade skates, which sparked a
life-long love for the game of hockey. Rusty and his brother Buddy
spent their formative years playing hockey in Blind River and along
the North Shore in Northern Ontario. Both were scouted and signed
to professional contracts, with Rusty at the age of 17 signing with the
dream team of his youth – the Toronto Maple Leafs. A favorite
memory was when he attended the prospects camp for the Maple
Leafs. There, he met the Toronto coach “Hap” Day, who arranged for
him to borrow a pair of skates from a Toronto player to replace the
hand-me-down pair that he had brought to the camp. At that same
camp, he met and became friends with the legendary Maple Leaf
defenseman Tim Horton. They remained good friends until Tim was
tragically killed in an auto accident in 1974.
Rusty was assigned to play with the Maple Leafs farm team, and left
home at the age of 18 to pursue his career in hockey. Unfortunately,
injuries forced a return to Blind River where he finished his high
school career. During that time, he was recruited to play with the
Detroit Red Wings farm team. Afterwards, he continued his hockey
career playing for the Soo Greyhounds in Saulte Ste. Marie, Ontario.
After 2 years with the Greyhounds, he was accepted to the Ryerson
Institute of technology in Toronto, Canada, where he played for the
college’s hockey team, serving as captain of the team.

After graduating with an associate’s degree in electrical engineering, he left

hockey behind and started his engineering career. He met and
married the former Paula Ruopp of Highland Park, Michigan in 1957,
and they made their home in Elliot Lake, Ontario where Rusty was
employed as an electrical engineer in the mining industry. Their family
grew with the addition of two sons.
Rusty and his family immigrated to the US in 1959 and Rusty began a
career at the GM Tech Center in Warren, Michigan. He also attended
classes at Wayne State University and graduated with a bachelor’s
degree in Electrical Engineering. During that time, Rusty and Paula
purchased a home in Lathrup Village, Michigan, where they lived for
many years. He also continued his interest in hockey by being
involved in coaching for the Southfield Youth Hockey Organization,
where he coached several players who reached the division 1 NCAA
level. He also taught both of his sons to love the game.
In his long career with the Tech Center, Rusty’s research work
resulted in 22 patents for General Motors. One of his patents for a
pressure sensor brought him national accolades, including the GM
McCuen Award. To this day, his invention is a part of most
automobile engine control systems.
He retired from GM in 1988 to split time between their winter home at
Ramblers Rest in Venice, FL and their summer home at Lake
Duborne in Blind River, Ontario. Rusty has made his home with son
Mark in Big Rapids for the past several years. A service will be held
at a later date in Blind River. Memorials can be made to Great Lakes
Caring Hospice.

Honoring his wishes cremation will take place. To send a message of sympathy to the family, or to sign Rusty’s online guest book, please visit: www.MichiganCremation.com