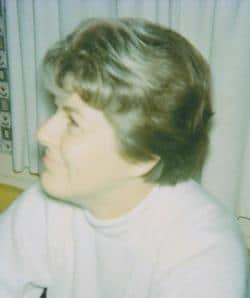 Barbara Lorraine (Berg) LeVan entered this world on June 3, 1929 and took her last breaths on March 26, 2017.  She said herself “I’ve had 87 good years”.  Barb’s dash had many highs (quitting smoking) and a few lows (like losing 160 pounds!), all of which shaped her into the tenacious woman she was. Barb loved her family fiercely.

Barb retired from American Seating after 36 years and proudly volunteered for the Grand Rapids Police Department for 8 years. Barb enjoyed playing golf and bowling, watching the Tigers, traveling, and collecting clowns. She also loved John Wayne, bird watching and was an avid reader. After she lost most of her ability to see, she was very thankful to have the Association for the Blind supply her with books on tape. Barb was the epitome of perseverance and bravely finished her dash here on Earth with dignity and grace.

She leaves behind her talented children, Pamela LeVan Burdick (Michael Vanderhorst), Scott LeVan (Linda), Bart LeVan, and Dawn LeVan; grandchildren, Rob LeVan (Andrew Yocum), Amy LeVan and Jamie LeVan. She was especially fond of her one and only great grandson, Max LeVan.  She also had many caring people in her life, particularly Elaine VanderVoord.

Memorial contributions may be directed to Shriner’s Hospitals for Children (www.shrinershospitals.org/Donate). Envelopes will also be available at the funeral home.

To send a message of sympathy to the family, sign Barbara’s online guest book, or to share a favorite memory, please visit:  www.MichiganCremation.com   Arrangements are entrusted to Michigan Cremation & Funeral Care, Grand Rapids.