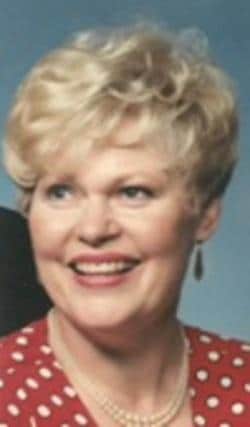 Barbara Joan (Hoshal) Freiberg, age 81, passed Thursday, May 31, 2018 at the Hospice House of Mid-Michigan in Lansing from complications of Parkinson’s Disease.

Barbara was born on July 14, 1936 in Windsor, Ontario. After graduation from secondary school in Windsor in 1954, Barbara attended the University of Michigan studying operatic vocal performance. She later earned a Bachelor of Vocal Music Degree from Michigan State University. Barbara spent the next three decades as a loving mother raising her three children in Lansing and Okemos. During this time, Barbara was active in many philanthropic and musical organizations including: The Junior League of Lansing, Women’s Club of Lansing, Lansing Matinee Musicale, Steiner Chorale, East Lansing Arts Chorale, and Lange Singers. She was also a very popular private voice and piano teacher for dozens of students in Okemos. Recently, Barb was an active member in the Martin Luther Chapel Choir, and the DeWitt Community Singers. The love of music and the companionship of her friends were constant themes in Barbara’s life.

Barbara had many other talents other than music. She was a master gardener and gourmet cook. Her Sunday family dinners were always dotingly prepared and enjoyed by all. Barbara was also a rabid University of Michigan football fan. She would often attend or watch games with her grandchildren, ensuring their indoctrination into the fandom of the “Maize and Blue.”

In 1990, Barbara married Walter Freiberg and spent the next 26 years living a blissful existence until his death in 2016. Much of this time was spent “Up North” on Lake Charlevoix and Petoskey where they hosted and entertained weekly influxes of friends and family throughout the years. As Walt’s health declined in the last years of his life, Barbara’s greatest expression of her love was the care she gave to her ailing husband.

Barbara’s memorial service will take place at 11:00 a.m. on Tuesday, June 5, 2018 at Martin Luther Chapel, 444 Abbot Rd., East Lansing, with Pastor Dave Dressel officiating. Visitation will be held one hour prior to the service at 10:00 a.m. She will be laid to rest next to Walter at Fort Custer National Cemetery, 15501 W. Dickman Road, Augusta, at 2:30 p.m., Tuesday afternoon.

Special thanks for support are given to Walt’s children, especially Art and Debbie Schroeder, Bill and LuAnn Freiberg, and Rich and Sandy Freiberg. The family is also grateful for the friendship and religious guidance from Pastor Dave Dressel, and Pastor Curt Dwyer, of Martin Luther Chapel in East Lansing.

Memorial Contributions in Barbara’s memory may be made to the Martin Luther Chapel, (www.martinlutherchapel.org), or Michigan’s Parkinson’s Foundation, (www.parkinsonsmi.org).

To send a message of sympathy to the family, sign Barbara’s online guest book, or to share a favorite memory, please visit: www.MichiganCremation.com