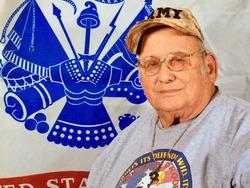 He was born March 22, 1926 in Bonners Ferry, Idaho, son of the late Rosi and the late Amelia Paolucci. Due to the onset of WWII, Arnold left school to enlist in the United States Army in February of 1943. He served in the Pacific until December of 1946.

Arnold Paolucci and Lucille Smith were united in marriage on April 9, 1977 in Chicago, Illinois. Arnold was a loveable man who could always put a smile on your face. He enjoyed cooking, woodworking, painting ceramics, going to the casino, playing cards and scratch-off tickets. More importantly, he loved spending time with his family. He will forever be remembered for his playful nature, storytelling, and famous spaghetti dinners.

Visitation with the family will be from noon until the time of service at the Grand Rapids Home for Veterans.

Memorials can be made to the Grand Rapids Home for Veterans.

To send a message of sympathy to the family, sign Arnold’s online guest book, or to share a favorite memory, please visit: www.MichiganCremation.com