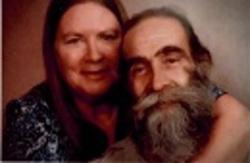 Allen Pueblo, age 60, passed away Wednesday, November 23, 2016 at home in the arms of his loving wife, Debby, and other family members. The son of Dorothy Pueblo and the late Julius Pueblo, he was born on September 14, 1956 in Shreveport, Louisiana.

Allen had open heart surgery at a young age, even with heart problems and murmurs all of his life, he still proudly worked and retired with 30 years at General Motors. He worked in plants in Kalamazoo, Janesville, Wisconsin, and later retired from the Flint G.M. plant. He battled liver cancer for 11 years. During this battle he had two liver resections, chemo, and radiation therapy at the University of Michigan Hospital. In October 2015 he had open heart surgery at the U of M. The cancer came back this past year, but his will to live was strong. He was proud to walk his daughter, Courtney down the aisle when she wed Walker Eason this year in April.

Allen loved the Michigan Wolverines, fishing, and hunting. He never shot a deer, he just loved sitting in the woods watching them. The last month of his life during the suffering were happy times. In July he moved up north and had deer and turkey to enjoy watching in his backyard. The piece and quiet were priceless. He called  it “Tranquility Acres.” Allen married Debby (Rubleski) Pueblo on May 18, 1985 in Honolulu, Hawaii. They were together 38 years and traveled all across the United States. His beautiful daughter Courtney was the love of his life and she made him proud. She was not only smart, but held jobs all of her life, and is now employed at Stryker Corporation. Allen was a member of the Upper Room Church of Christ in Kalamazoo. His uncle Ed Palmore was pastor of the church and married Courtney & Walker in April. He loved his family very much and was a private man.

He was preceded in death by his brothers, John and Cecil Pueblo; and nephew, Robert Pueblo. He is survived by his mother, Dorthy Pueblo; brother, Roy (Amy) Pueblo, of Otsego; and several aunts, uncles, nieces, and nephews. Allen also loved his mother-in-law, Pat Meyer, and Debby’s family. Through the years his closeness grew to her family, and was a result of sharing many wonderful events together. Even as Allen struggled with the cancer, he continued to help family and friends with projects.

At Allen’s request, cremation has taken place. A celebration of his life will take place in the spring. He was a man with a big heart, who helped many people. The greatest donation that you could give to Allen will be to show love to one another, give encouragement, and show respect to each other. Arrangements are entrusted to Michigan Cremation & Funeral Care, Grand Rapids.