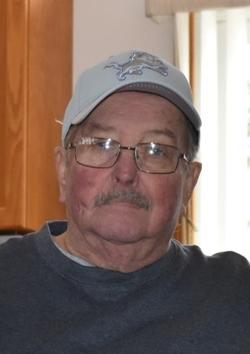 Allan Joseph Raspotnik, age 74, of Irons, Michigan, passed away peacefully with his wife by his side the morning of Friday, April 5, 2019.  Allan was born November 25, 1944, in Manistee, to the late Joseph Raspotnik and Mamie (Grandpacka) Raspotnik.

Allan graduated from Manistee High School in 1963.  He then joined the United States Army where he served his country during the Vietnam era from 1963 to1966. During this time he logged over 130 jumps as a Paratrooper in the 101st Airborne.  He met the love of his life Janeen (Clement) on July 3, 1964, and they were married in 1967. They had been married 52 years on January 20, 2019.  They had two daughters Renia Lyn Raspotnik (Siwy) and Robin Lynnea Raspotnik (Peterson).

Allan worked in many capacities over his lifetime from Maintenance at Morton Salts to Craftsman at Century Boat and SZ Yachts to a machine operator at Herman Miller where he retired from in 2007.  He was a hardworking and dedicated employee – a trait that he instilled in his children and grandchildren.

Allan loved sports, but Michigan football and basketball and the Detroit Lions and Tigers were his favorites. Go Blue!  He also enjoyed spending time with family at the cottage, traveling, and deer hunting with the guys.

Visitation will be held at 10 am on Friday, April 12, 2019, at Zion Lutheran Church, 77 West 32nd Street, Holland 49423.  A memorial service will follow at 11am with Pastor Ryan Winningham officiating.  The burial service with full military honors will be at Tallman Cemetery in Tallman, MI on Monday, April 15th at 1pm with Pastor Gale Richardson officiating,

The family would like to extend a special thank you to the ICU doctors and nurses at Holland Hospital and the staff at Hospice of Holland for their care and compassion throughout this difficult time.

To send a message of sympathy to the family, sign Allan’s online guestbook or to share a favorite memory, please visit: www.MichiganCremation.com