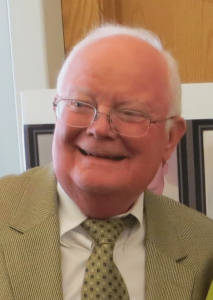 On Saturday December 26, 2020 Gerald (Jerry) Kenneth Wesche, age 77 left these earthly bounds and is now rejoicing with his Heavenly Father with no more pain and suffering. He was born January 29, 1943 in Detroit, MI to August John and Mary Catherine (Schug) Wesche, the last of eight children.

He graduated from Forest Hills High school in 1961. He was in retail all his working years; Atlantic Mills in Grand Rapids, MI 1960-1962; Goldfines in Duluth, MN 1962-65; Atlantic Mills in Detroit 1965-66; GEM in Livonia, MI 1966-67; transferred to Denver, CO in 1968; and returned to Grand Rapids, MI to work for Meijer in 1972 where he finished out his career as Stock Loss Coordinator for the Lansing, MI market. He retired in 2004. After retirement he had his remodeling and special order furniture business, GKW Enterprises.

He loves our Lord and Saviour and loved to discuss the Bible. He enjoyed the weekly men’s breakfast group and discussing politics. We attended Greenville First United Methodist Church for 27 years before moving to Zeeland and attending Waypoint Church. Over the years his faith was strengthened when he attended “Standing in the Gap” in Washington and went to Haiti on a mission trip. He never forgot his experience in Haiti where he was so amazed at the JOY that people with nothing have. Jerry loved having lunches out on the pontoon with friends, playing cards, working on projects, and travel. The last 15 years have taken us on amazing adventures to Alaska for a month, the South West and North West for three months each.

The family would like to thank those who have supported Jerry and the family, including friends, medical staff at Holland and Butterworth hospitals and the members of the Waypoint Church. We are moved by the compassion, care and support they have shown. Services will be announced at a later date, due to COVID 19.

To send a message of sympathy to the family, sign Gerald’s online guest book, or to share a favorite memory, please visit:  www.MichiganCremation.com